Murder of the Peddler Historic Site 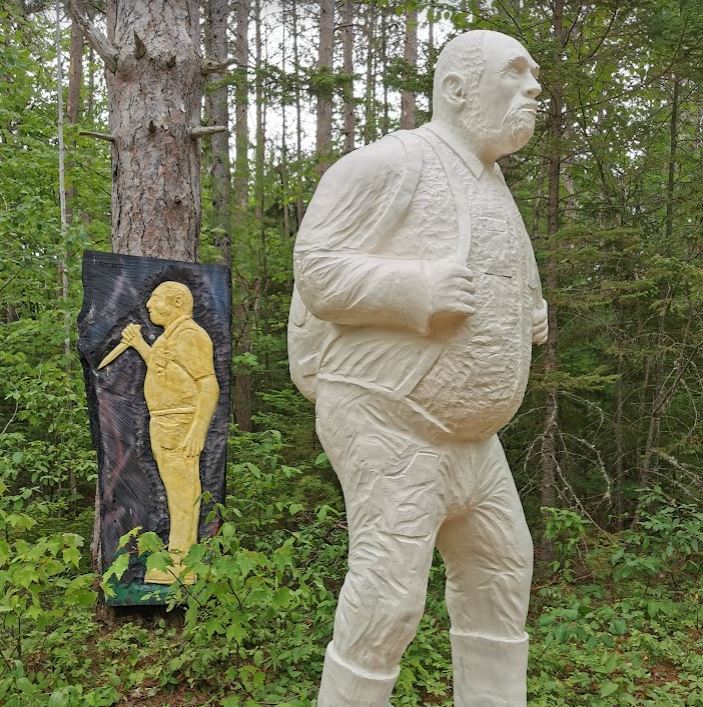 The murder of the peddler took place around 1885 at this very location. The peddler was a cattle buyer from St. Andrews or St. Stephen. In the fall he would travel the St. Andrews Road and buy cattle from the local farmers. He would herd them on foot all the way to the Fredericton Junction railway station where he would sell them and have them transported to a major city. The peddler had great stock and received a considerable amount of cash for his efforts. He put all his money in his knapsack and was ready to start for home. As he passed the Beehive Hotel, located in the center of the Junction, he thought that he would treat himself to a fine meal. The meal was fine and being tired he decided to stay overnight. He got into a card game with three strangers. It was not long before liquor had loosed his tongue and he bragged of the big money he had just made. The three strangers saw him as an easy mark and plotted to rob him the next day on the Diamond Square Road. They viciously murdered him and stole his money. The body was not found for a week and the criminals were long gone. The murder remained unsolved after three years.

Then mysterious change of fate occurred, a man in Montreal was being sentenced to hang for murder, at the hanging a priest gave the criminal his last rights and said a prayer- The priest asked if the man if he wished to clear his conscience on any other crimes he had committed before he went to meet his maker. It was at this time the criminal confessed to murdering a peddler just outside Fredericton Junction, NB. He described the murder in great detail; stating they only wanted to tie him up and rob him. However the peddler was very strong and put up a tremendous fight, it took all three to bring him to the ground and still they could not get the knapsack off him. He said they had no choice but to stab him to death. The murderer stated the peddler fought hard till he finally bled out.  The murderer then went to the gallows without revealing the names of his two accomplices.

This information was passed on to the Sheriff  in Fredericton Junction .The local community had become very suspicious of any stranger that passed through .Doors were locked and a great fear had taken over the village. The news that the murderer had finally been caught and hung eased tension in every household.

The community has remained faithful in maintaining the unnamed peddlers grave and memory… It is now part of our history.